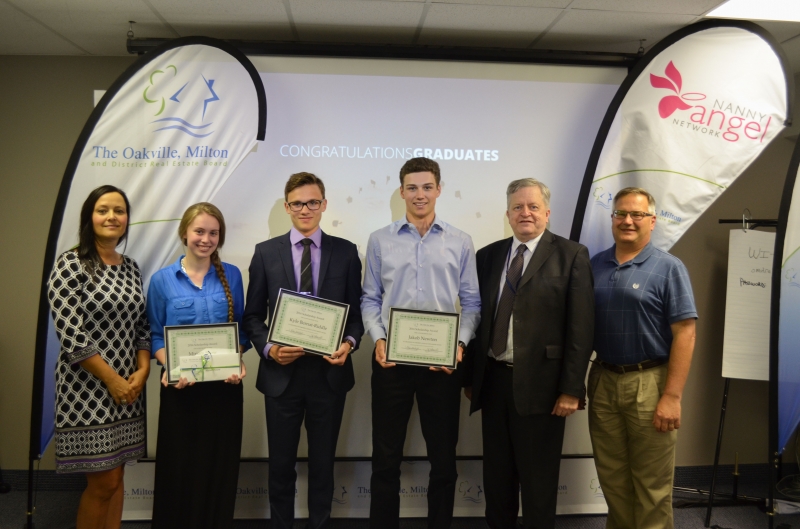 OAKVILLE, ON, JUNE 8, 2016 – Four deserving Grade 12 students from the Halton area were awarded $2,500 scholarships for their submissions to the Oakville, Milton and District Real Estate Board’s Scholarship Award. The students’ work ranged from video submissions to written essays on topics about the economy, how critical and mental illness impacts families – which is associated with the President’s Charity, Nanny Angel Network – and shelter-based initiatives.

Snow submitted a video on shelter-based initiatives; Bernat-Riddle wrote an essay on the importance of small businesses in communities; Newton wrote about the impact critical illnesses has on families; and Adam wrote about her family’s struggle with mental illness.

“[These students] have demonstrated an incredible drive and passion to excel both inside and outside of the classroom,” said 2016 OMDREB President, Charlotte Forget. “Their essays and video submissions were thought-provoking and heart wrenching.”

“We are truly fortunate to have these bright young people among us.”

The OMDREB scoring panel were faced with a challenge after receiving 24 submissions, as each submission was well thought out. However, Forget says the panel is confident it chose well.

“We are confident that we are recognizing the cream of the crop here today,” she said.

Oakville Mayor Rob Burton was at the celebration and imparted some words of wisdom to the graduates as well.

“I don't think it matters where you go to school; I think it matters more what you do with what you get,” Burton said. “Focus on learning to learn; learning as much as you can, and developing your ability to be a learning sponge. That will take you very far in life.”


About the Nanny Angel Network
The Nanny Angel Network is a registered charity and the only organization of its kind in North America to provide free in-home childcare support for mothers who have been diagnosed with cancer, those requiring palliative care and for families requiring additional relief during the bereavement period.