2020 Board of Directors Candidate Profiles 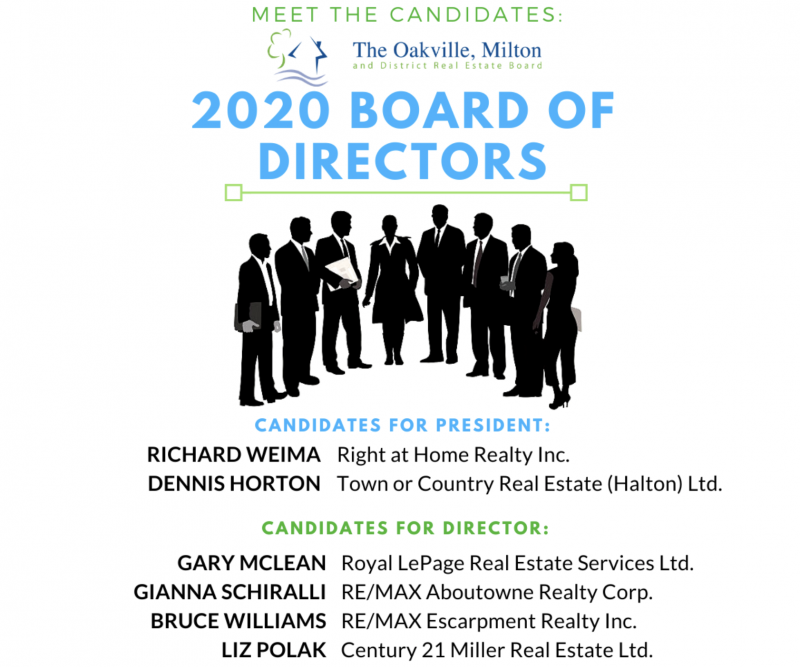 Richard Weima was OMDREB President in 1993, Finance Chair in 1992 (year prior to Board Building sale and purchase) and a member of the Finance Committee in 1991 and 2016 He also served as a Director of the REALTORS® Association of Hamilton-Burlington in 2017-2018.

During his term as OMDREB President, the Board signed its first mutual access agreement with the Metropolitan Hamilton Real Estate Board or the REALTORS® Association of Hamilton-Burlington (RAHB), as it's known today. Richard also was involved when the Board sold its offices on Trafalgar Road and relocated to its current home on Navy Street.

With his passion for REALTORS® and for the real estate profession, Richard is currently the Managing Broker of Right At Home Realty’s Burlington branch office. As in his past and now in the present, Richard serves to further the industry and those in the business.

Dennis Horton served as OMDREB’s President in 2017 and has contributed to the overall direction of the Board since 2010, he has been a strong voice for the local OMDREB REALTOR® at the Board table from 2012-2018. As an active agent, he is well aware of the impact the decisions made at the Board table can have on REALTORS® & our OMDREB brokerages. Dennis’s goals are to promote and develop the best uses of technology at OMDREB, Communicate Board decisions effectively to the Membership, and ensure the Board focus is to strive to give OMDREB REALTORS® a competitive advantage in their daily business.

Dennis, a graduate of McMaster University, with an Honours degree in Business, has been a Salesperson at Town or Country Real Estate (Halton) Ltd. for the past 9 years. He is the Broker of Record at his office and has been a Member of OMDREB for the past eleven years. Dennis brings extensive experience as a small business owner to the Board and has always maintained a focus on fiscal awareness and responsibility at the Board table.

He has chaired several OMDREB committees including Vision Task Force, Finance, Education, and Milton Initiatives. His years chairing the Finance Committee will be invaluable in planning/managing the funds prudently from the potential sale and move of the Board building. His term as OMDREB President gave him experience working with other Boards, our governing Associations and our various service providers, on issues such as shared MLS data. An issue at the forefront of every REALTOR’S® mind, he will continue the work already started by OMDREB on improving the data sharing with our surrounding boards in hopes to eliminate the need for multiple Board memberships in the future.

On a personal note, Dennis and his wife Kelly are parents to two children and a new puppy! He is involved in many of their extracurricular activities, including hockey and gymnastics. Dennis looks forward to continuing to volunteer his time and skills to help OMDREB best serve its Membership.

Gary McLean is a Sales Representative with Royal LePage Real Estate Services Ltd. He's been serving clients in Oakville, Burlington and Milton since 2008. Prior to his real estate career, Gary spent over 25 years in sales and management positions with a variety of Telecom and Information Technology companies, including IBM, Lucent, GT Group Telecom and Norstan. He's served on the boards of Big Brothers, Big Sisters of Halton, and Crime Stoppers of Halton. He's also served on OMDREB's Professional Standards Committee for a number of years. Gary's lived in Oakville since 1975, and is a shameless booster of Halton as the Best Place to Live in Canada.

Gianna has been in the real estate business for 5 years with Remax Aboutowne Realty Corp., Brokerage. Gianna was inspired to obtain her Brokers licence last year.

Before entering real estate Gianna graduated from Western University with an honours double major in 2013. Upon graduating from university Gianna accepted a position as District Manager for a sales company. She successfully managed a large sales team, with resulted in her office being awarded #1 for volume for Eastern Canada in 2014.

Gianna’s vision for OMDREB is working towards a singular MLS system across the province with complete and accurate data compiled from all the boards. Gianna feels OMDREB has made incredible progress over the last couple of years, and her desire is to continue with that momentum. Gianna leader that will advocate on your behalf to make changes to our current system that benefit you as our members, which in turn benefit your clients.

Gianna looks for your support in the upcoming election.

Bruce has been a Sales Representative in organized Real Estate since 2004. Initially with RE/MAX Aboutowne and then 13 years with Royal LePage Real Estate Services, he is now with RE/MAX Escarpment Realty Inc. Before getting into Real Estate, Bruce spent 30 years working for Air Canada and has always been committed to a high level of customer service.

Bruce was an OMDREB Director in 2017 and 2018, was previously on the Professional Standards Committee and is currently on the Discipline Committee.

Bruce has been an Oakville resident for over 30 years, works with his wife and two sons, and has been a full member of OMDREB and TREB since 2004.

Liz Polak comes from an academic background with over 15 years of teaching, research and writing experience.

Liz Polak is a Broker with Century 21 Miller R.E. Ltd., Brokerage and a member of Oakville-Milton Real Estate Board. She is passionate about the real estate industry and has been part of the Gov’t Relations committee for the past three years. She contributed to changing the Town open house sign by-law (increasing open house signs display from 3 to 5), and to bringing the monthly Town Talks with Oakville Town Council.

She volunteers in the community and supports the Easters Seals charity and the Farley Foundation.